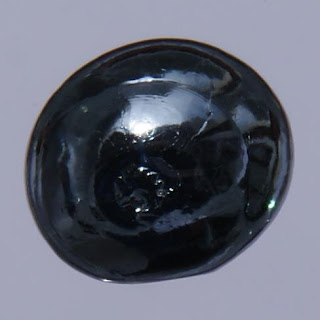 Osmium is the most dense metalfound on earth!!Its so dense and heavy that acubic foot weighs 640kg, as muchas ten average people!A football made up of osmiumwill weigh as much as twofootball players!! 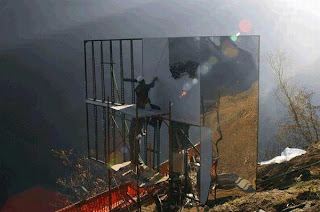 There’s a Town in Italy that doesn’t get sunlight for 84 days a year. They’ve solved this problem with a giant mirror:

Call it the reverse Montgomery Burns scheme. The little town of
Viganella is located amidst the Italian side of the Alps. During the
winter time, the shift in the sun’s pattern makes it so that it never
clears the 1600 feet tall mountain that’s close to the town. This means
that for 84 days, they do not get any
sunlight. The townspeople end up suffering from Seasonal Affective
Disorder, a type of mild depression.

To solve this, the
government installed a massive mirror on the side of the mountain. It
measure 26×16 feet and is computer controlled to follow the trajectory
of the Sun. The result is that starting in 2006, the town was able to
celebrate the first winter sun in 600 years! 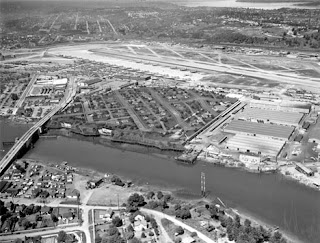 The destruction of a lesser-known Seattle pseudo-suburb is underway.
This series of a dozen square blocks was lofted forty feet in the air
but, despite looking picture-perfect (a series of pristine streets,
homes, yards and trees) it was never intended for human habitation. 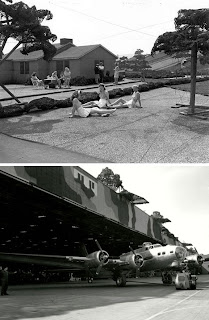 A little anomaly dates back to World War II, this whole fake
neighborhood built atop a Boeing factory south of downtown Seattle,
meant to hide the presence of airplane production facilities below … the
cumulative size of eight football fields. 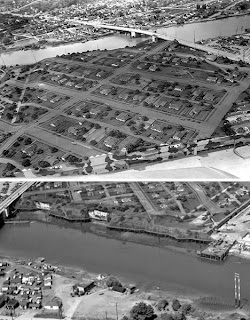 Houses, streets and plants were assembled like stage props out of
plywood, clapboard, chicken wire and burlap, covering the plant’s roof
during World War II. If any Japanese bombers made it this far east, the
hope was that their pilots would mistake this for a quiet residential
neighborhood. 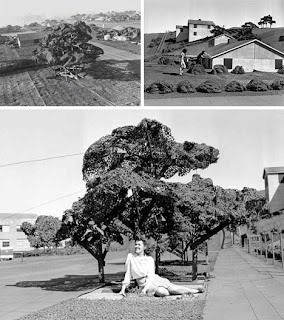 Despite the proximity of faux overhead homes, workers from the plane
plant took an entirely opposite route to get out, heading down instead
of up. Secret underground tunnels to reach nearby and
likewise-camouflaged cafeterias, classrooms and restrooms – images of
people on top were merely staged for a post-construction photo and film
shoot. 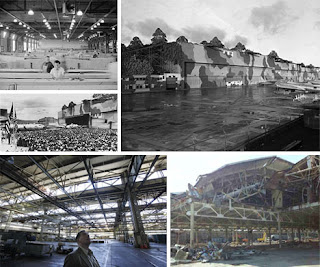 But these would-have-been houses will not go to waste – the reclamation
of remaining materials is in progress. The Duluth Timber Company is
salvaging scraps as well as heavy timber beams from the site before it
is leveled. 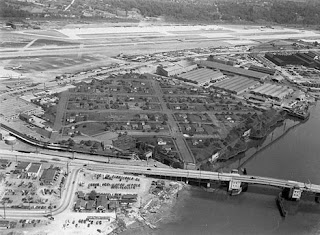 As for the plant itself: it became increasingly outdated (and
structurally dangerous) as decades past, despite being the original home
of many famous Boeing aircraft including the original B-52 bomber and
737 jetliner. 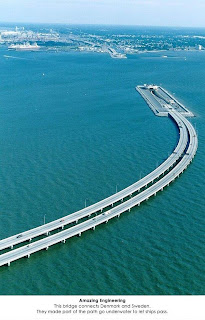 The Øresund Bridge is a combined twin-track
railway and dual carriageway bridge-tunnel across the Øresund strait
between Sweden and Denmark.

The bridge runs nearly 8 km (5
miles) from the Swedish coast to the artificial island of Peberholm,
which lies in the middle of the strait. The remainder of the link is by
tunnel from Peberholm to the Danish island of Amager. The Øresund Bridge
is the longest combined road and rail
bridge in Europe, and connects two major metropolitan areas: those of
the Danish capital city Copenhagen and the major Swedish city Malmö.
Furthermore, the Øresund Bridge connects the road and rail networks of
Scandinavia with those of Central and Western Europe.

The
justification for the additional expenditure and complexity related to
digging a tunnel for part of the way – rather than simply raising that
section of the bridge – was to avoid interfering with air traffic from
the nearby Copenhagen International Airport, and also to provide a clear
channel for ships in good weather or bad, and to prevent ice floes from
blocking the strait. The Oresund Bridge crosses the border between
Denmark and Sweden, but in accordance with the Schengen Agreement and
the Nordic Passport Union, there are usually no passport inspections.
There are random customs checks at the entrance toll booths for entering
Sweden, but not for entering Denmark. 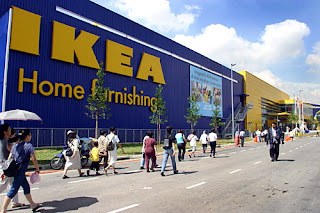 The theory behind the design is: the longer a customer is inside the
store and the more furniture they see, the more items they are inclined
to buy. This layout is so confusing that oftentimes shoppers make
purchases simply because they are afraid they may never find their way
back to the item!

A study at a store location in Kent, England showed that patrons spent
an average of 3 hours inside the store, with a significant number
remaining for as long a 8 hours! IKEA is quick to deny any intention to
purposely bewilder its customers, citing shortcuts within the facility
(built primarily due to fire code), but the store’s exits still are not
very easy to find.

Akon’s father is Senegalese percussionist Mor Thiam. He was born in St. Louis, but lived back in Senegal until the age of 7. After that, he split time between living in the United States and Senegal until finally settling down in New Jersey at age 15.

The oxygen on Earth keeps this from happening. On the outside of all
metal there’s a layer of oxidized metal that prevents metal from
sticking together.

In space, there is no oxidation layer. When pieces of metal come into
contact with each other in space, they stick together to become one
continuous piece of metal.